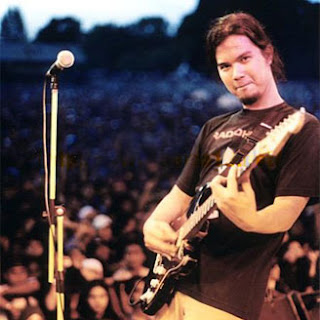 DEWA 19 standing in the year 1987, at the time still so called DEWA only. Taken away from initial name of the player: Dhani Ahmad Prasetyo, Erwin Prasetya, Wawan Abi and Andra Ramadhan which that moment is student SMPN 6 Surabaya. Four nuts about conjugates with this music also mutuallies agree to sticks jazz as their music line. But in the same years of Wawan leaves third of his friends with reason of fairly not likes jazz, DEWA must excise still and finally finds substitution Wawan.
After finish from SMAN 2 Surabaya, Dhani becoming the prestigious school student still joint forces with DEWA, even often DEWA which at that moment change name DOWN BEAT represents name of SMAN 2 band for band festivals and becoming the champion. DEWA 19 formed by intact at the time of DOWN BEAT invites Wawan and Ari Lasso which of course student SMAN 2 to fill event of parting in the year 1991. The embedded 19 in taking away from average of their age that moment and likely there are conformity between them.
After ending SMA with the entry of Ari Bernadus Lasso ( vocalist), DEWA starts thought of step hereinafter, be record kitchen. Meagrely capital financial and big intention, DEWA intends record kitchen admission in Jakarta. Fortunately, there is one of friend in SMA ready to assist DEWA for finance problem, so that accessible DEWA of record kitchen.
After a few months, finally the recording process ready to completed, but arises new problem that is looking for the record company who willing to accommodate and circularizes the songs of DEWA. After passing a period of which is difficult finally DEWA gets record company which will become distributor. That moment emerges name of DEWA 19 which in taking away from name of personnels DEWA and numeral 19 in taking away from average of personnel age DEWA that moment 19 years.
In 1994, DEWA 19 releasing second album and at that moment, the position of Wawan Abi as drummer in replacing by Ronal from GIGI and Rere. In the year 1995 DEWA 19 at the time of releasing album third emerges Wong Aksan which for DEWA it’self that compatible Wong Aksan in their band. Then Dhani offers Wong Aksan as drummer in DEWA 19 is being zero. In the year 2000 at the time of album " Pandawa Lima" formation DEWA 19 returns to changing that is with replacement of vokalis from Ari Lasso in changing with Elfonda ( ONCE) and drummer from Wong Aksan in replacing with Tyo Nugros.
Diposting oleh the_leonal di Rabu, Oktober 13, 2010