THE ALL AMERICAN REJECTS

The All-American Rejects is a four-piece American rock band from Stillwater, Oklahoma, was formed in 1999. [2] The band consists of vocalist and bass guitarist Tyson Ritter, Nick Wheeler guitarist and keyboardist, guitarist Mike Kennerty rhythm, and drummer Chris Gaylor.
The band achieved mainstream success with their self-titled debut album, The All-American Rejects, released in 2002. This album spawned the hit single "Swing, Swing" and went platinum by the RIAA. [3] 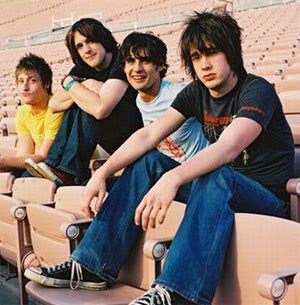 The band's second album, Move Along (2005), brought the band more mainstream success. This album produced three hit singles: "It Ends Tonight", "Dirty Little Secret" and "Move Along", which are all mapped in the top fifteen on the Billboard Hot 100 chart. [4] "Dirty Little Secret" and "Move Along" was also certified double platinum with over two million digital downloads of each in the United States, while the album itself is certified double platinum by the RIAA. [3]
The All-American Rejects' third album, When the World Comes Down, released on December 16, 2008. The first single, "Gives You Hell", became the first song the band became an international success: it peaked at number-four on the Hot 100 chart, number three on the Australian ARIA Singles charts and diagrams in the top twenty of the UK Singles Chart. [4] [5] [6]
Since the beginning of their career, The All-American Rejects have sold more than 10 million albums worldwide. [7] [8] Although the band did not make Billboard's "Artist Decade" lists, All-American Rejects are ranked # 73 on the "Hot 100 Artists of the 2000s" [9] and # 183 on Billboard's "200 Artists of the Decade "
Diposting oleh the_leonal di Senin, Oktober 11, 2010